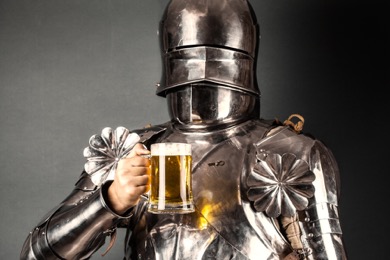 Beer has been one of the most popular beverages since the very beginning of time, and Fizzics is here to offer you ten captivating facts on the history of beer! After learning about the centuries of beer delicacy, there's no way you'll pass up on the opportunity to revamp the way you drink beer with a Fizzics personal draft beer dispenser. Let's check them out!

1. Beer dates back to the earliest human civilizations.

Beer has been a part of humanity since the very beginning, even preceding the written language. Beer brewing and drinking was an essential component in ancient peoples' survival tactics and social lives.

Water was an untrustworthy drinking source during ancient times. It was polluted and unsafe to drink, so people drank beer because it was fermented and reliable to drink.

3. During ancient times in Mesopotamia, beer was linked to religious rituals.

The Epic of Gilgamesh, one of the earliest surviving pieces of literature, described beer as "one of the blessings of civilization." Beer was considered a gift from the gods, meant to promote health and happiness among humans. Many epic poems revolve around the topic of beer, with deities drinking beer and getting so drunk they end up giving away important objects.

4. In the Code of Hammurabi, it was stated that bartenders who watered down beer would be executed.

The Code of Hammurabi was Babylonia's code of law during Mesopotamian times. Babylonians were serious about their beer, and those who tainted beer batches or watered them down would be punished through execution!

5. The Egyptians built the Great Pyramids while (slightly) intoxicated.

6. In Medieval European times, Catholic monks would partake in "beer fasts" during lent.

During lent in Medieval Europe, Catholic monks would give up food and solely drink beer. The monks called beer "liquid bread."

7. Average Europeans in Medieval times drank much more than the typical person today.

Although greater amounts of beer are brewed today compared to Medieval times, Europeans drank much more in the past in comparison to people now.

8. Women were the main individuals who brewed beer in ancient times.

Move over boys! It turns out that women were the original brewers in ancient times. Women were the people taking care of the home, so it's fitting that they prepared the essential drink.

9. Ninkasi was the Mesopotamian goddess of beer.

10. The oldest brewery that still operates today is located in Weihenstephan Abbey in Bavaria, Germany.

It's no surprise that beer remains a fundamental drink for many. To ensure delicious draft taste with every glass you pour, try out Fizzics' growler beer dispenser. Our Micro-Foam Technology creates the perfect balance of flavor and creamy feel that every beer drinker wants.