Some Really Good Reasons Why Fall is Beer Season 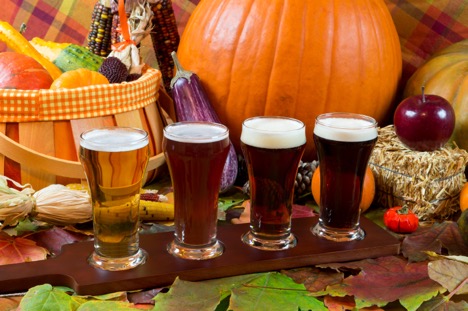 The leaves are quickly changing outfits and falling. And, for some reason, many of us are really in the mood for a tasty brew. Of course, this could be a fact year-round for beerheads - but there seems to be a greater pull as the days cool down. But why is that the case? We at Fizzics wanted to know, so we found out. Lucky for you, right?

So let's begin at the beginning. Since the dawn of man...well, maybe not that far back - for centuries, beer has been a staple for most of modern civilization. In fact, it was safer to drink ale than the "fresh" water in Europe - circa 14th century - giving brewers around the world plenty of time to perfect their craft before the millennium.

One European nation helped shape the way we view fall and associate it with beer. That nation was Germany.

On October 12, 1810, the city of Munich held a five-day festival in celebration of the wedding between the crown prince of Bavaria and Princess Therese von Sachsen-Hildburghausen (got that name memorized? There's a test at the end)*. This festival quickly became an annual event in October, and beer halls started popping up more often, turning this marriage celebration into a two-week-long beer lover's paradise that is holding steady today. Craft Oktoberfest beers are always showing up in bars and beer distributors worldwide and, true to tradition, they are usually a form of German märzen that is brewed and sold in the fall and winter.

The Taste & Color of the "Saison"

Yeah, so saisons are primarily spring and summer beers. Try to get past it, and appreciate the pun, okay?

Anyway, fall is a time of russets, ambers, golds, crimsons, and other earthy tones to flood the outdoor canvas. And what excellent drink matches those colors perfectly? Beer. It's beer, you guys! This may be an obvious statement, but, c'mon, just think about fall foliage and then think about a beer. It just makes sense!

Now that we've dealt with the aesthetic associations, we can now speak to the taste and texture of fall beers. We love to drink brews in the fall because beer holds a whole range of palate-pleasers, including spices, chocolate, coffee, pumpkin, smokiness, and baked bread. They are also usually brewed with heavier textures and higher ABVs for a nice warm-up!

Fall is Beer Season Numero Uno, and you know why. We may have left out a few dates and a couple of technical terms, but we make up for it with our cheeky tone, right? If not, at least you can snag one of our mobile beer dispensers or growler beer dispensers, just in time for fall!